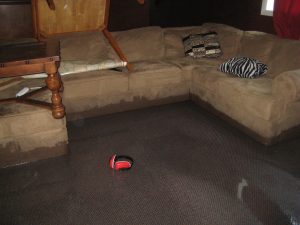 Many of us have been there. We look up, and there’s a curious round circle of moisture on the ceiling. Or, you notice a place between your door wall and wood trim during a rain storm where water is coming in and pooling on the floor. Or, maybe you realize you have a bathtub or shower that’s been leaking into the floor, but hope it hasn’t been doing it for long – and maybe it was just a few drips just this one time.

While some water damage is more severe than others, it’s important to have it addressed in a timely fashion no matter what. The problem you see could just be the tip of the iceberg and the longer you let it go, the worse it could get and the more costly the repair could become.

Let’s play a quick game of “did you know” – on the topic of water damage.

The damage, whatever it is, is repairable! WET of Cleveland knows how to not only find the source of the water or leak, but also how to fix the leak and whatever damage was done. PLUS, if there’s mold, we’ll properly remove that too.

Restorers use some special tools to detect where water damage might be in your home or business, before doing demo on any walls, whenever possible. The main tool for this is a thermal imaging/infrared camera. While it won’t tell the technician in your home that there is specifically moisture hiding behind that wall in your bathroom, it will indicate a temperature difference that could mean there is water back there.

For example, during the winter in Cleveland, when your furnace is running, most wall cavities will show up red or orange on the camera, indicating warmth. However, the presence of a blue area would indicate a cooler spot, which could mean moisture. A skilled water restorer, like our WET crews, would know for sure based on what they see on the camera.

Here’s the bottom line: if you see a water leak somewhere in your home, don’t wait and hope the problem will go away. It’s better to address it in a timely fashion than run the risk of more damage being done.