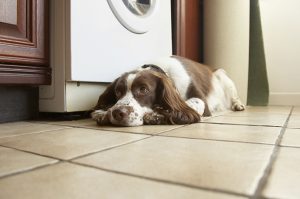 There are some obvious risks in the home, but an often overlooked disaster waiting to happen is the hot and cold hoses going to the back of your washing machine. They fail and cause serious floods so often that property owners should take the time to consider and even purchase special insurance policies in the event of a disaster. Most homeowners are simply not aware of the impending issue of old or faulty washing machine hoses. One single malfunctioning hose can result in hundreds or thousands of gallons of water flooding your home or building.

In a normal home plumbing system, water comes out of a washer hose at about 600 gallons per hour (that’s six gallons per minute). Since the hoses are always “on,” water will flood from a broken hose until someone notices it and turns off the main valve.

The Institute for Business and Home Safety says that water damage from washing machines is one of the top five causes of claims to home insurers. A single broken hose can lead to flooding overnight creating a serious and expensive disaster, and not every faulty washing machine hose shows visible “warning signs” of an imminent flood.

Since faulty washing machine hoses are among the top five causes of home insurance claims involving flooding, that alone should be reason enough to replace hoses older than five years.

How Does This Happen?

What You Can Do: